A little more than halfway through the Boston Mayoral and some front runners are beginning to finally emerge.  This comes as some interest groups begin to press candidates on their positions on certain topics. The Carpenters Union and two Developers have formed the Responsible Development Coalition to push the candidates to take a pledge to support development. In addition the Boston Chamber of Commerce recently published a breakdown of the candidates’ views on various issues including development.  However the funding of the candidates may be the best indicator of their likelihood of taking the big chair at City Hall.

To date in 2021, City Councilors Andrea Campbell, Michelle Wu, and Annissa Essaibi George have all raised north of $800,000 with each of them spending less than half of the money raised.  Notably, Acting Mayor Kim Janey has spent nearly as much as the three fundraising leaders despite having raised only half of their money.

However, Mayor Janey is clearly leveraging her office and position to boost fundraising as she has outpaced the field over the last several months with Councilor Annissa Essaibi George close behind.  Councilors Campbell and Wu have benefitted by being the first two candidates in the race, however it appears that their ability to hit up additional donors or gain traction have been limited by Mayor Janey’s emergence.

For the most part it appears as if Campbell and Wu have wed themselves to progressive issues. Meanwhile Mayor Janey and Councilor Essaibi George are trying to thread the needle by appealing to progressives while also calling for stability and continuity in the leadership coming from City Hall.  Both have tempered calls for defunding police and touted their previous work with Mayor Walsh and others.

From the outset, it has appeared likely for a progressive to capture City Hall. The question will be whether turnout for the preliminary election in September will favor one candidate or if there are issues like the Police Commissioner firing which will raise or lower the profile of a candidate. Nevertheless, Councilor Wu appears poised well based on Campaign Finance data.  She has raised the second most money of any candidate overall ($1.3 M), the second highest percentage (45%) was from people who live in Boston, and she has had a smaller percentage of donations over $500 than any other candidate. This could mean there is major grassroots support for Councilor Wu from across the city that could bode well for her election chances. 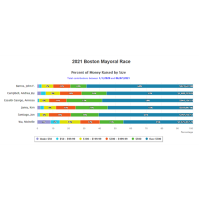